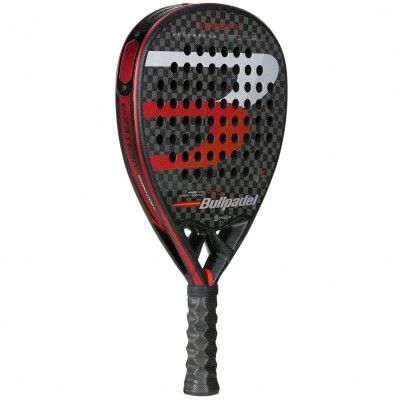 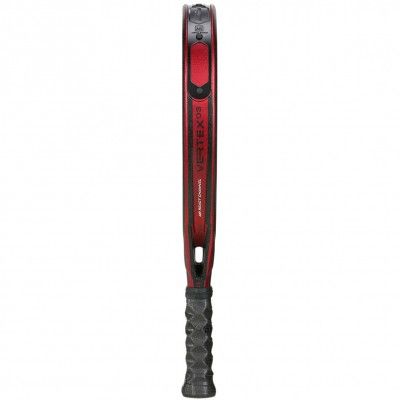 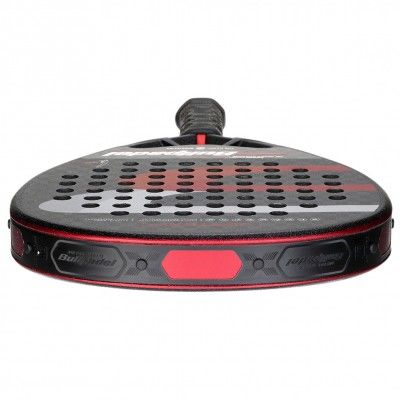 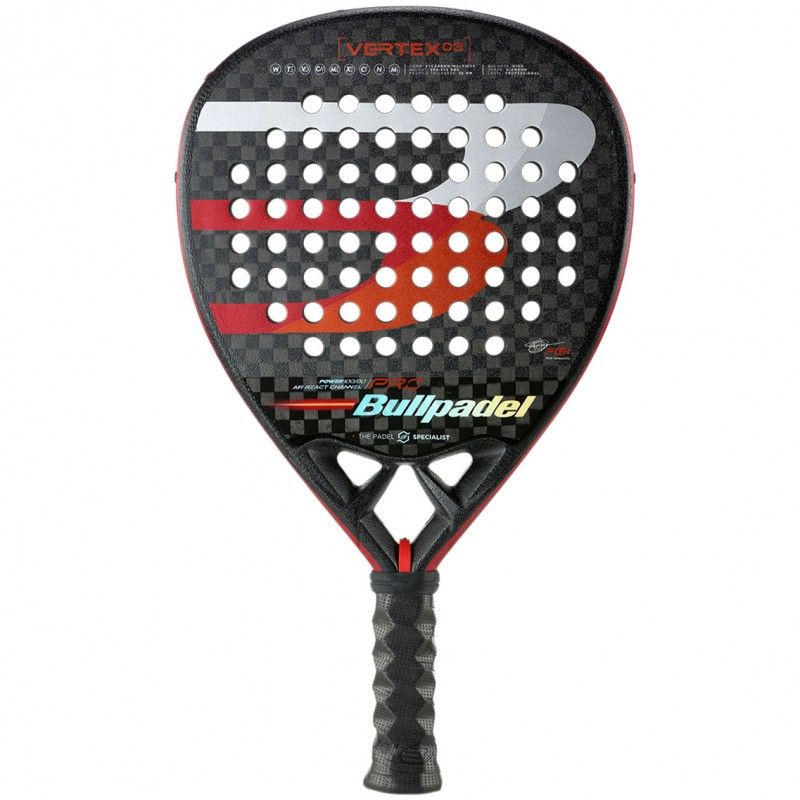 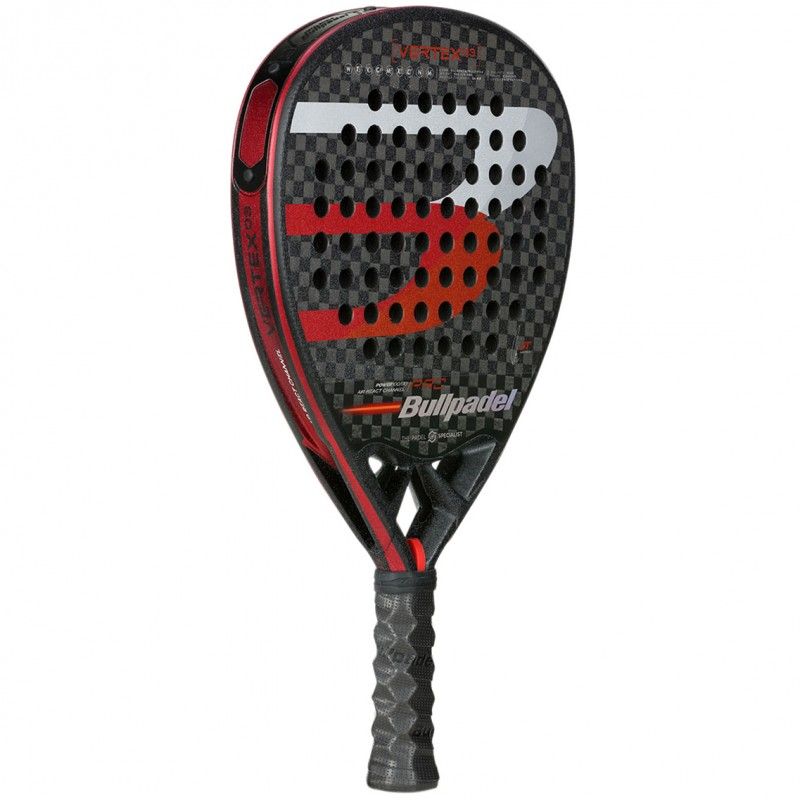 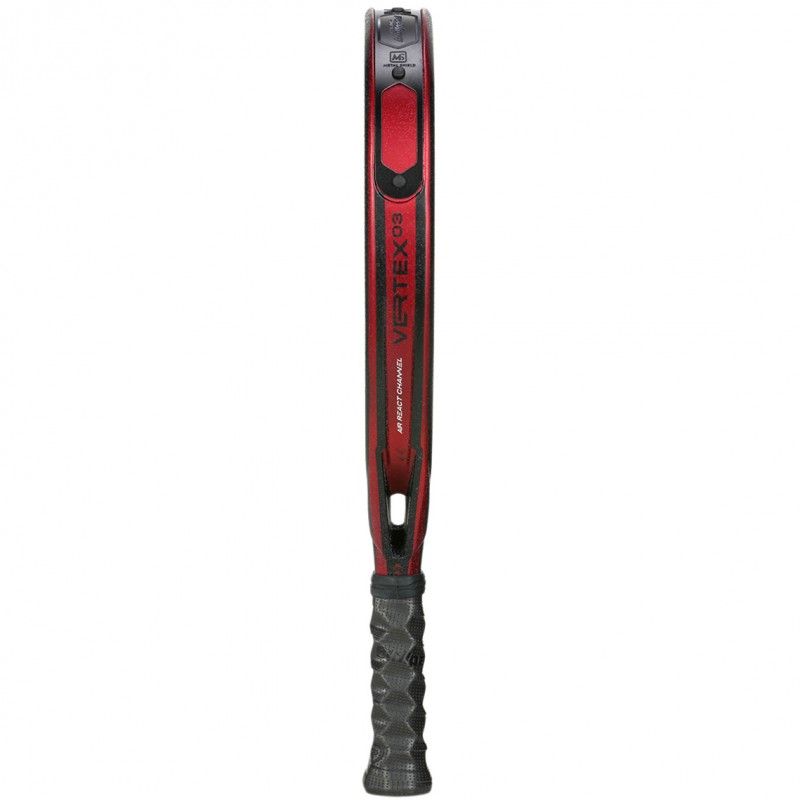 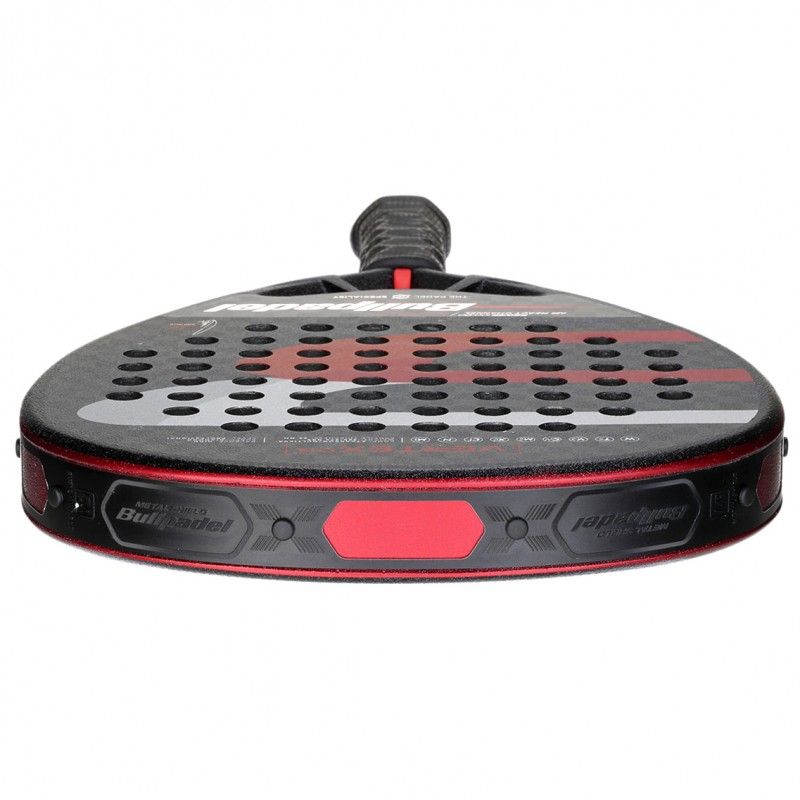 The new BullPadel Vertex 03 2022 is a diamond-shaped racket, with maximum power, high performance without loss of control. Used by Juan Tello and Fede Chingotto. The incorporation of the new Vertex heart with the Air React Channel system stands out, where the hollow structure and its four arms increase the stability of the frame, thus obtaining a greater reaction in the exit of the ball and greater precision in hitting. Rough Topspin surface for grip and ball spin.

- Its outer core is made of Xtend Carbon 12K carbon, its inner core of the new MultiEva rubber and its CarbonTube frame of 100% carbon fiber.
- It has the Metalshield protector, which adapts to the new CustomWeight weight plate system allowing you to modify the balance of the racket according to the needs of each player, which complements the customization of the racket with the GripCustomWeight, where you can add weight in the grip to lower the balance of the racket obtaining greater shock control.
- It has the Vibradrive system for vibration absorption and Nerve channels on the side of the blade frame. In addition, it incorporates the innovative Hesacore grip, which reduces effort, vibrations and the probability of injury.

Get this fabulous shovel and feel how your arm and it become one. Racket conceived for professional or advanced players.

AIR REACT CHANNEL®: - An aerodynamic frame where the air passes through the heart of the blade through a hollow channel, creating a firmer, more agile and lighter structure at the same time. The four arms of the heart structure generate a more powerful and faster reaction when the stroke is accelerated and greater control when placing the ball. To achieve this evolution we dissect the player's blow in two phases.
- PREPARATION: The faster the paddle moves through the air, the more acceleration speed you can print on the ball. The hollows of the arms allow air flow, making a more aerodynamic and lighter blade.
- IMPACT: The new frame formed by four arms at the heart gives greater firmness to the structure of the blade, producing a greater reaction of Return of energy when hitting, resulting in a higher ball exit speed.

VERTEX: - The Vertex heart incorporates distributes weights and forces eliminating vibrations, reducing torsion and increasing rigidity, together with its diamond shape, it facilitates a solid volley and maximum power hits.

METALSHIELD: - This protector made of aluminum alloy of reduced weight, provides great resistance to impacts and protects the frame of the blade at a superficial and structural level. It is anchored to the frame with a special adhesive of great consistency, avoiding drilling holes in the frame.

VIBRADRIVE: - Vibradrive is a grip mounting system in which a piece of high elasticity rubber is inserted, dividing it in half. This piece absorbs most of the vibrations produced in the game, especially on off-center hits.

TOPSPIN: - Topspin consists of a rough surface finish that favors grip, thus achieving a greater effect of the ball in contact with the blade.